She’s the one who got away. But I live for the chase…

I’m a thrill seeker. I fly the fastest jets in the world, and ride my motorcycle when I’m on the ground. The only thing that matters to me is speed. Why would I ever think about settling down?

Jenny Reeds, that’s why. One look in those hazel eyes and I found a thrill no dogfight could match. For one wild, unforgettable night, she was mine. I wanted to keep her close but she disappeared without even telling me her last name.

I did my tour and flew combat missions in desert skies. But I never forgot her.

Now they have me pushing papers and training new pilots. I thought I’d be bored to tears. Guess who I run into my first night back?

It’s her, my wild-eyed, fiery-haired beauty. Turns out she’s the General’s daughter. But that won’t stop me. I’m persistent and it doesn’t take too long before she’s back in my arms.

Only one problem. She’s kept one hell of a secret from me. She had a baby while I was overseas. My baby.

Now I want them both under my roof. Permanently. I’ve never failed a mission yet and I don’t intend to start now.

Cockpit is a standalone novel with a guaranteed HEA and no cheating. This edition includes bonus materials and will end before 100%! 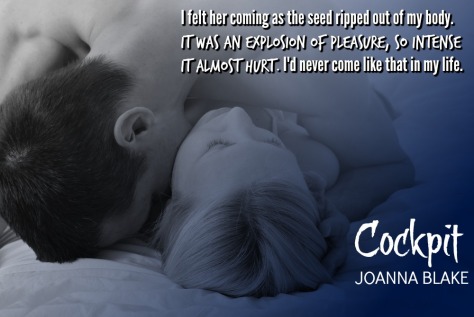 I rubbed my cheek where she’d slapped it, admiring the way she looked in those tight jeans of hers as she stomped off. She was a redhead alright. Only a russet haired woman would slap a man after kissing the hell out of him.

And Jenny was one hell of a kisser.

I took my time coming back in. Not because I was worried she’d slap me again. I was just deep in thought.

Mostly thinking about gettin’ deep in her.

I sat down and ordered a watered down pitcher of beer. I had a long night ahead of me. I had someone to walk home.

The woman basically scowled up and down the whole night.

I didn’t mind a bit though. I’d gotten my answer when she kissed me. She wanted me back, no matter what she said.

The spark was still there, and then some. She didn’t have to like it. There wasn’t a damned thing either one of us could do about it.

Joanna Blake loves good old fashioned romance, men who open doors and work with their hands. Hot Blooded Heroes is a series of sizzling stories about True Blue American men and the women who love them. She’s thrilled to be collaborating with Pincushion Press on her new series! Come along for the ride!

Other books by Joanna Blake