*This book can be read as a STANDALONE*

I fight for what’s mine.

Growing up with a junkie for a mother, Stiff’s responsibilities came young and fast, taking care of his brother with everything he had. If that meant getting his hands dirty, then so be it.

Becoming part of Vipers Creed MC gave him the family he and his brother never had, people they could count on. He vowed to protect them, even when that meant turning his back on the woman who gave him life … until Chelsea.

He knew he wasn’t good enough for her, but he didn’t care. He had to have her.

After all, Stiff always fought for what was his. No matter the price.

No one messes with my family.

Chelsea Miller’s life was simple: work, family, save for the future. Every day was the same. Her ultimate goal: live an easier life than the one she’d been dealt. That was, until her sister ended up bleeding, bruised, and fighting for her life.

Everything in Chelsea’s life changed in an instant. And the cost of protecting her family was far higher than she had bargained for.

Stiff. The Vipers Creed MC. A relentless trail of bullets and carnage. Everything she knew turned on its head.

Survival of the fittest, they say. Well, Chelsea’s a survivor. And she refuses to go down without a fight.

When two stubborn people clash in a combustion of passion and family, will conquering each other come at a price neither of them is willing to pay?

*Due to subject matter, mature audiences 18+ only*

Reviewer: Hope Wanderlust
5 Stars
“Baby, conquering you would be a fucking pleasure.”
Stiff has noticed Chelsea before. She’s worked at the diner he and the Vipers Creed members frequent for years. Chelsea is a survivor of her circumstances. Life hasn’t been easy, but, she’s a Miller woman and she has goals.
The night her sister is brought to the diner badly beaten changes Chelsea’s life forever.
That night Stiff decides that she is now under the protection of the Vipers Creed and makes it his duty to protect Chelsea and her family.
She is fiercely independent as well as protective of those she loves. He is just as protective of those he cares for.
Ryan Michele guides us through their journey with such chemistry as the following words that I loved will show:
“I dropped  my bag and wrapped my arms around my body, feeling the need to shield myself. I wasn’t afraid. No, this was more powerful, something on a cosmic level that I’d never known existed.”
“Id had sex. I’d made love. I’d fucked. But never in my life had any of that compared to this right here. Put all three of those into a blender, set that sucker on high, and put it in a shot glass – that was what this was.”
And my favorite words that a motorcyclists say… “Wrap your arms around me, he ordered.”
As much as I was sad to see the end of the novel…there was a treat at the end….Xander and Gabriela have a story to share!

“Prepared to be conquered, by Stiff. Vipers Creed is an MC series that keeps you craving more. Five plus stars for Conquering!” ~Terri Anne Browning, USA Today Bestselling Author

“This book is filled with all the goodies that Ryan loves to bring us. Her writing is an addiction that I for one crave.” ~Kathy Coopmans, USA Today Bestselling Author 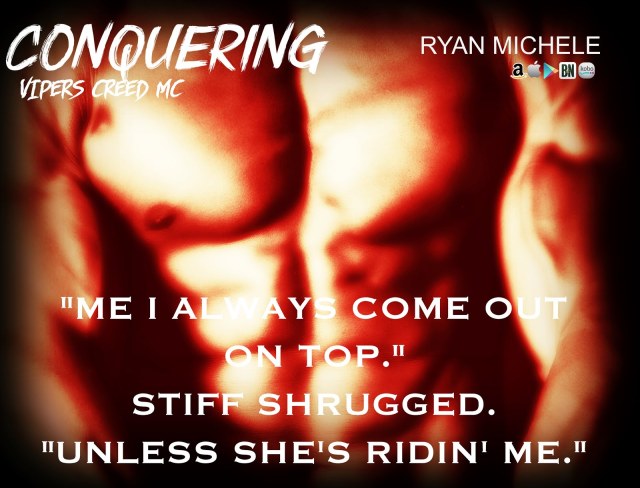 To enter the paperback giveaway over on Goodreads

Ryan Michele found her passion in making fictional characters come to life. She loves being in an imaginative world where anything is possible and has a knack for special twists readers don’t see coming.

When she isn’t writing, Ryan is a mom and wife living in rural Illinois and reading by her pond in the warm sun.