I lived for the rock and roll lifestyle. She didn’t belong in my world…
At the age of four, I held my first set of drumsticks.
I was hooked. All I ever wanted to do was beat out a rhythm.
By the time I was thirteen, I was obsessed with becoming famous.
By the time I was twenty-one, Razor’s Edge was a household name.
I was the rock star I’d always dreamed of.
I was living the dream: fast cars, and faster women.
I was hooked on what turned out to be an illusion.
Yes, I was famous. Yes, I was rich.
Yet no one told me I would ever be this unhappy.
Drugs, booze, and women became my vice.
I was on a path to destruction,
counted more visits to rehab than beats I could tap out on a drum.
I was trapped in a world I couldn’t escape.
But from my darkest days emerged a shining light.
Will her light be bright enough to survive my hell,
or will my darkness kill the only happiness I’ve ever found?
ADD TO GOODREADS: http://bit.ly/HeartBeatsTBR

READ THE PREQUEL TO SHEET MUSIC:

Rocking Between The Sheets: http://amzn.to/2iymPdv 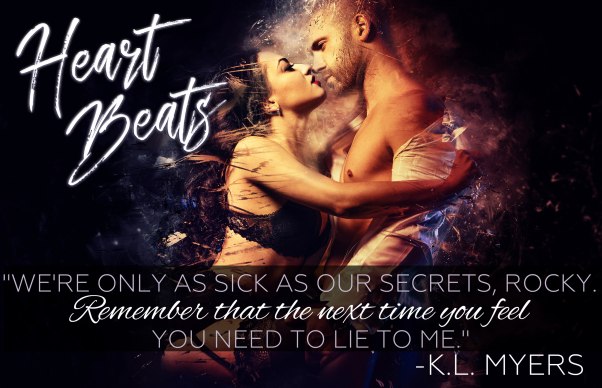 MEET THE AUTHOR:
KL Myers was born an Air Force “brat” in West Berlin, Germany moving with her family from Germany to Colorado to “hell”, aka Arizona where she resides with her husband David & their fur babies (3 cats & a dog). They have 2 grown daughters & 3 grandchildren.
KL has a passion for collecting PEZ dispensers & hot romance. When she isn’t juggling family & a full-time executive job, KL indulges her other passion- writing.
Her books & novellas show a pension for a bad boy with a heart of gold. Coupling her bad boys with strong, independent women who don’t need rescuing, just maybe a taste of naughty redemption! Her characters will pull you in & leave you satiated, yet panting for more, More, MORE!
FACEBOOK | READER GROUP | TWITTER | BOOK BUB
AMAZON | GOODREADS | WEBSITE